Making seitan for beginners. In this recipe video, we’ll show you how to make seitan chicken, which is vegan-friendly chicken that has become viral on TikTok!
➡️ SUBSCRIBE to Dished!

This vegan chicken aka seitan (wheat gluten)has been all over TikTok lately so you know we had to try it! Thanks to the Viet Vegan for this particular recipe. This Seitan method makes great seitan chicken that PULLS APART, vegan-friendly shredded chicken.

Seitan is known as miàn jīn, milgogi, wheat meat, gluten meat, vital wheat gluten, or simply gluten. If you love this how-to-make seitan chicken recipe let us know what you think in the comments below! #dished #seitan #vegan

Disclaimer: As an Amazon Associate I earn from qualifying purchases.

Instructions for making plant-based seitan recipe for beginners:
– Start by adding 1200 g or about 9 cups of flour to a large bowl
– It seems like a lot now but this will actually only make about 4 servings in the end
– Next pour in 750 ml or about 3 cups of water
– Mix with clean hands until a shaggy dough forms
– We found at this point it was easier to take it out of the bowl and continue kneading on the counter
– It’s going to take a little while but keep working the dough until it’s relatively smooth and it bounces back slightly when you poke it
– This means the gluten has developed and since seitan is just straight-up gluten, we definitely want that
– Put the dough in a clean bowl and completely cover with cool water then seal with plastic wrap and let rest for 1-2 hours
– Drain the resting water then pour in fresh cool water and it’s time to start washing the flour
– I know it sounds weird but essentially what you’re doing is washing away the starch and leaving behind the gluten which is what we want
– The water will turn an opaque white after a while and that’s how you know it’s time to drain and add fresh water
– You can save the starchy water to use in other recipes if you’d like
– Continue this washing routine until the water is no longer completely opaque
– This took us about 3 washes
– Don’t worry if there are loose bits of dough just strain it, and rinse it and the dough will magically connect together when it rests in a colander for 20 minutes
– After 20 minutes of draining, your dough should be cohesive and stretchy
– Transfer it to a clean surface and pull and shape it into a long oval or rectangle
– We’re now going to braid it so cut three strands, leaving the dough attached at the top.
– See how it springs back, that’s the gluten protein
– Braid the dough as you would with hair then tuck the end under
– Next stretch the braid out then tie in as many knots as you, we managed two
– The braiding and knotting is what’s going to give the seitan that shredded chicken texture
– Now to infuse flavor, add to a pot with your favorite broth
– Bring it up to a boil then reduce the heat to medium-low, cover and cook for about 2 hours
– By now the color will have darkened, you can eat it right away but for the best texture, let it rest at room temperature for about 2 hours then cover with the now cooled broth and chill in the fridge overnight
– Storing it in the broth just helps it from drying out, but it’s not totally necessary
– When you’re ready to use it, drain the seitan and pat dry with paper towels then you can tear pieces from the seitan that look surprisingly similar to shredded chicken
– Mix flour and water until a shaggy dough forms
– Knead the dough until it springs back when you poke it the cover with cool water and rest for 1-2 hours
– Drain the resting water then add fresh water and “wash” the dough to remove the starch
– We washed about 3 times, draining the starchy water after each pass
– Finally, rinse the dough and let it drain over a colander for 20 minutes
– Stretch the dough into an oval and slice into three, leaving the top part attached
– Braid the dough like you would your hair and tuck the end under
– Now stretch it out and tie it into two knots
– Add to a pot or slow cooker with your favorite broth. Could be veggie, chicken mock chicken, whatever, and cook on low heat for 2 hours
– When it’s done, you could use it right away but for the best texture, let it cool at room temp for 2 hours then chill in the broth overnight
– Drain and pat dry then you can shred it into these pieces that look surprisingly like chicken 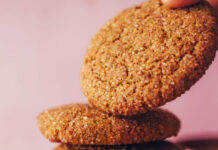 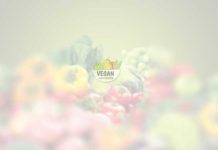 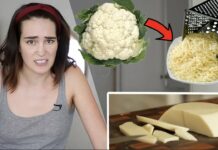 I Made Vegan Cheese From Cauliflower

My Recipes -
473
50
Categories
The latest recipes