Make a batch of apple pie bars for the perfect shareable fall dessert! Plus, these Salted Caramel Apple Pie Bars are vegan and gluten-free! 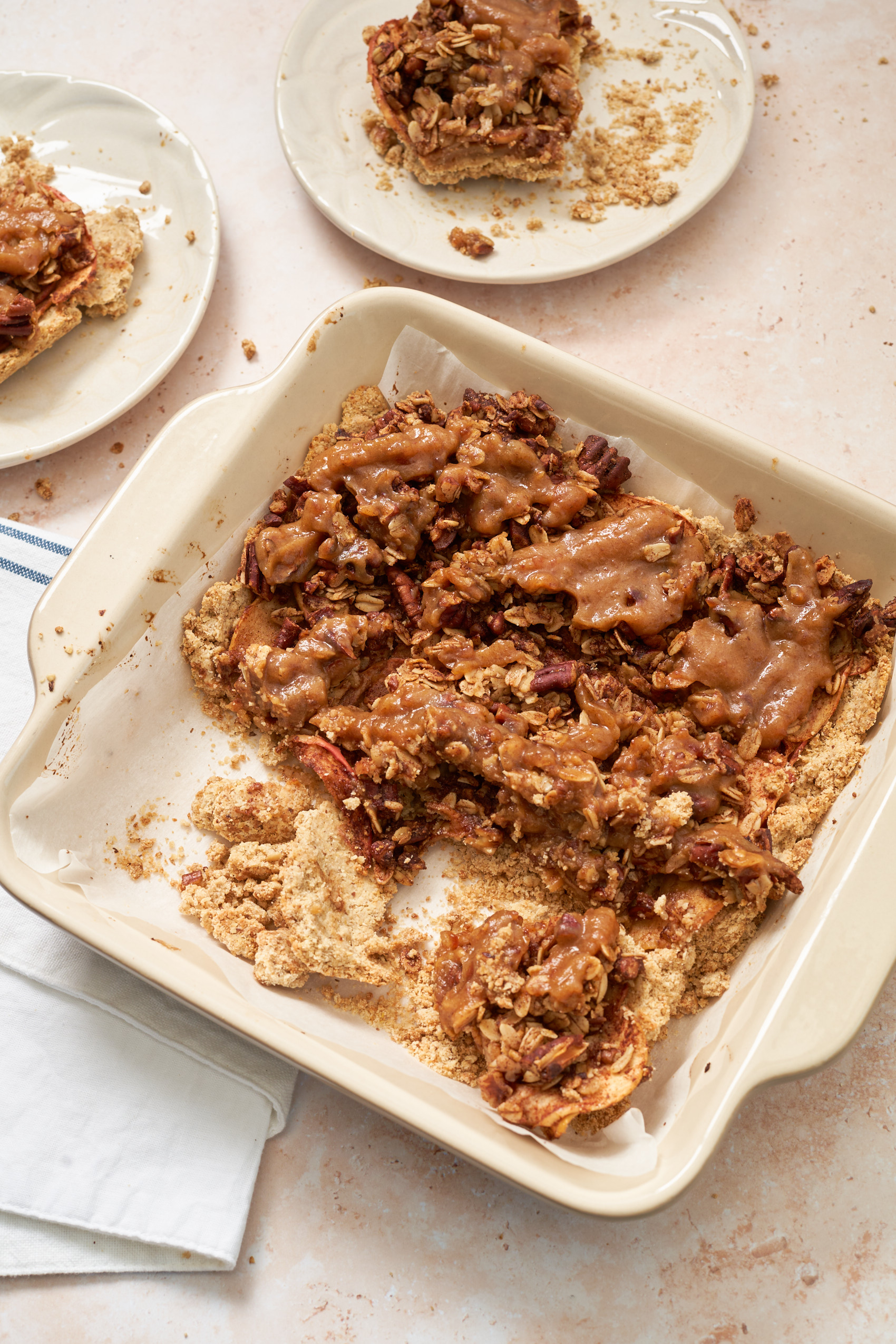 Okay I’ve got a hot take to share with you guys that I just have to get off my chest. I think everyone gets so caught up in pumpkin spice season, that we all forget that it’s also apple season.

Don’t get me wrong. I love using pumpkin in recipes for any meal of the day. From my Vegan Pumpkin Rice Crispy Treats to Pumpkin Sage Oat Risotto and Vegan Oatmeal Pumpkin Waffles, I certainly have no shortage of vegan pumpkin recipes on the blog. But as soon as September hits, everyone is so knee-deep in pumpkin spice everything that we forget that it’s the best time of year to make all your favorite apple recipes!

Well my friends, I’m here to celebrate apple season with these Salted Caramel Apple Pie Bars! Not only are these apple pie bars vegan and gluten-free, but we’re also making our own homemade salted date caramel sauce! Delicious and easier to make than traditional homemade caramel!

I’m a very determined, self-motivated person. If I have a goal or if you give me something to get done, you bet your a$$ I’m going to put my 100% into accomplishing it. As soon as I had it in my head that I wanted to make apple pie bars, I couldn’t shake the idea. It took me three attempts and many failed crusts in the trash to get these right, but these salted caramel apple pie bars turned out to be one of my new favorite desserts – decadent, fresh, full of classic apple pie flavor, and made with wholesome ingredients.

I know the ingredient list looks scary long, but I separated them into each step (crust, filling, topping, and caramel sauce). You’ll use a lot of the ingredients in more than one step, so I promise it’s less ingredients than it looks like! Keeping’ it simple here. 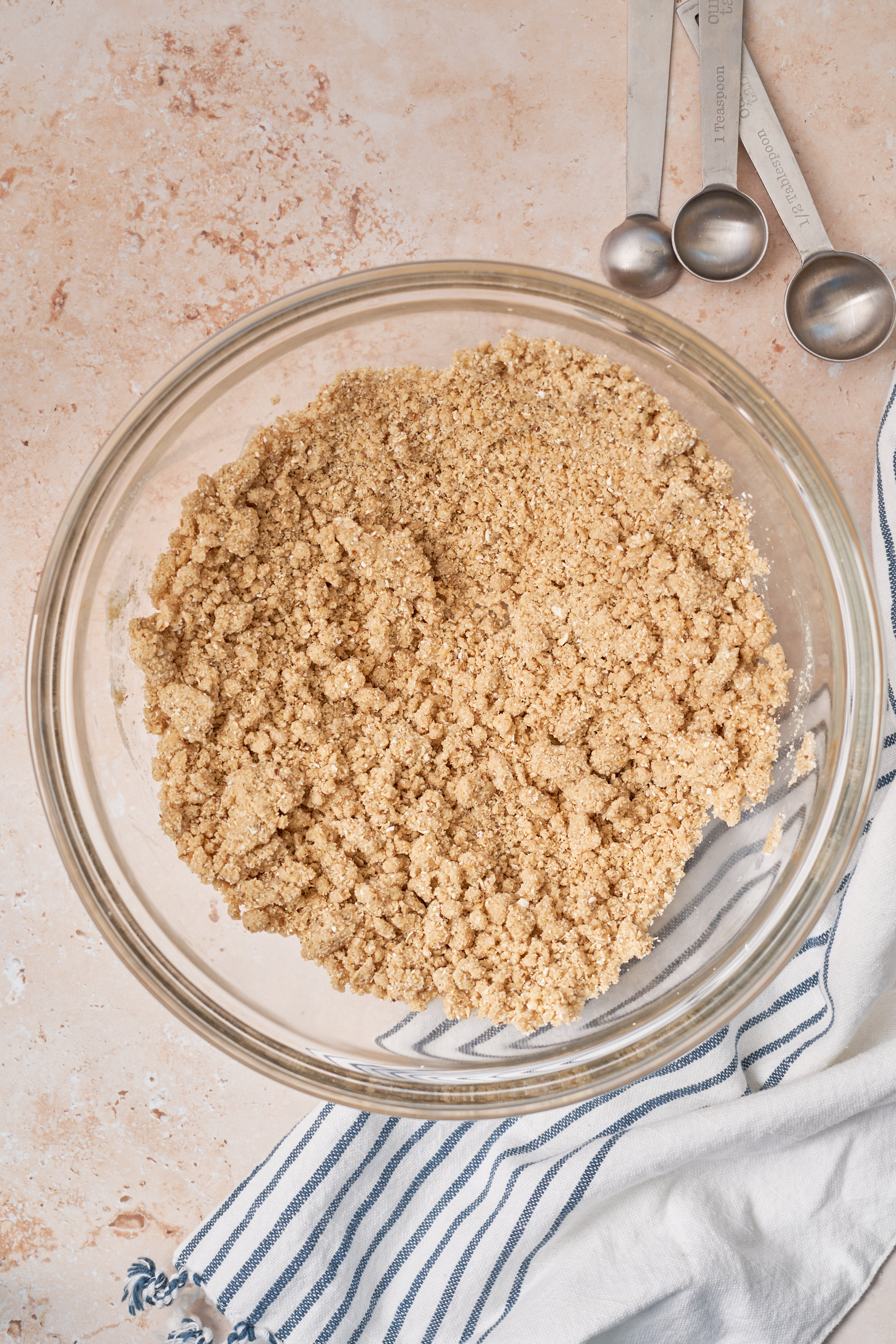 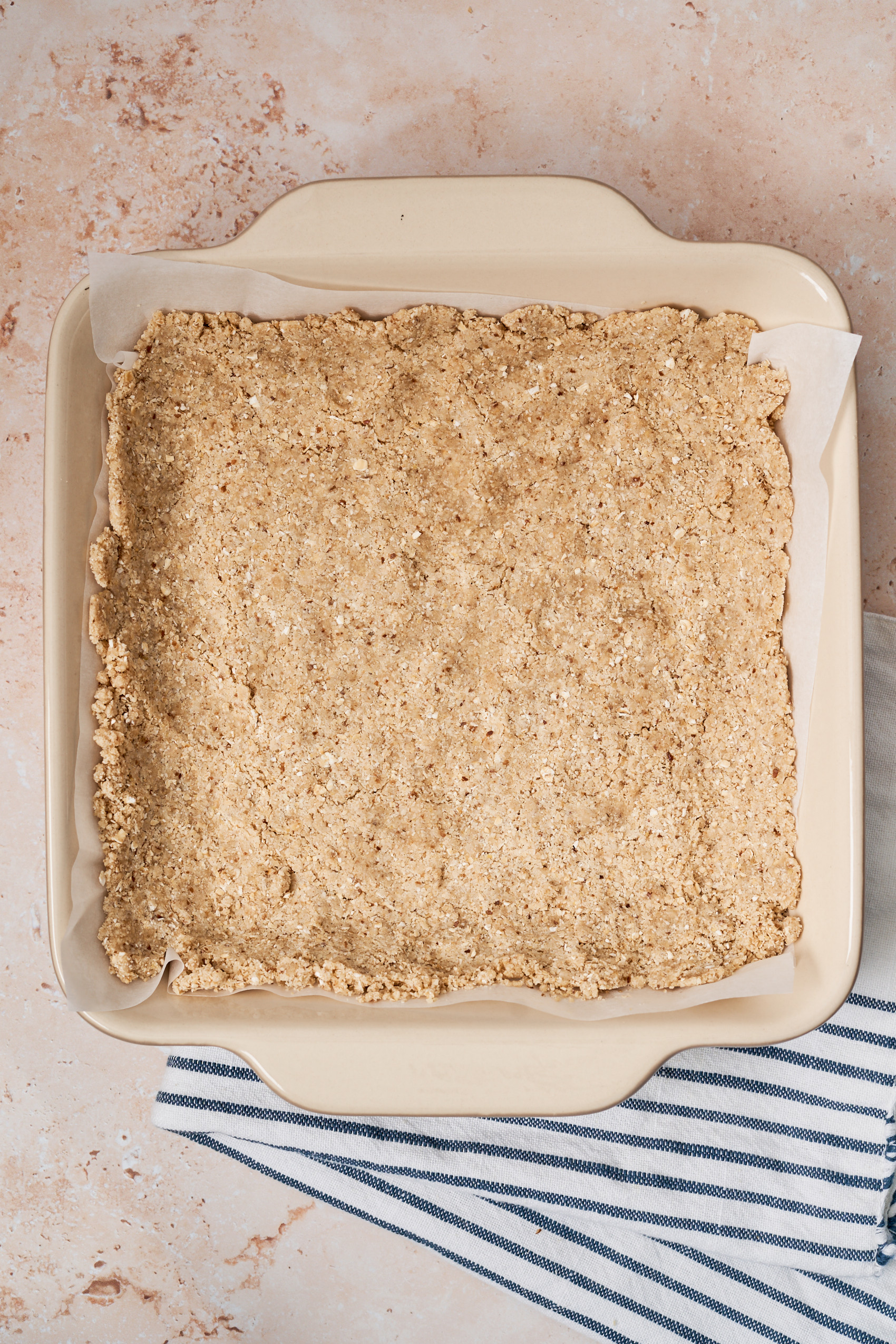 How to Make Gluten-Free Pie Crust

The base to these apple pie bars of course starts with a good crust. We’re making a gluten-free pie crust with almond and oat flours. It’s nutty, buttery and super simple to make. Since it’s gluten-free, it’s actually pretty difficult to overwork the dough, so no risk of dense cardboard crusts over here!

While your pie crust is baking, you can begin working on the filling! 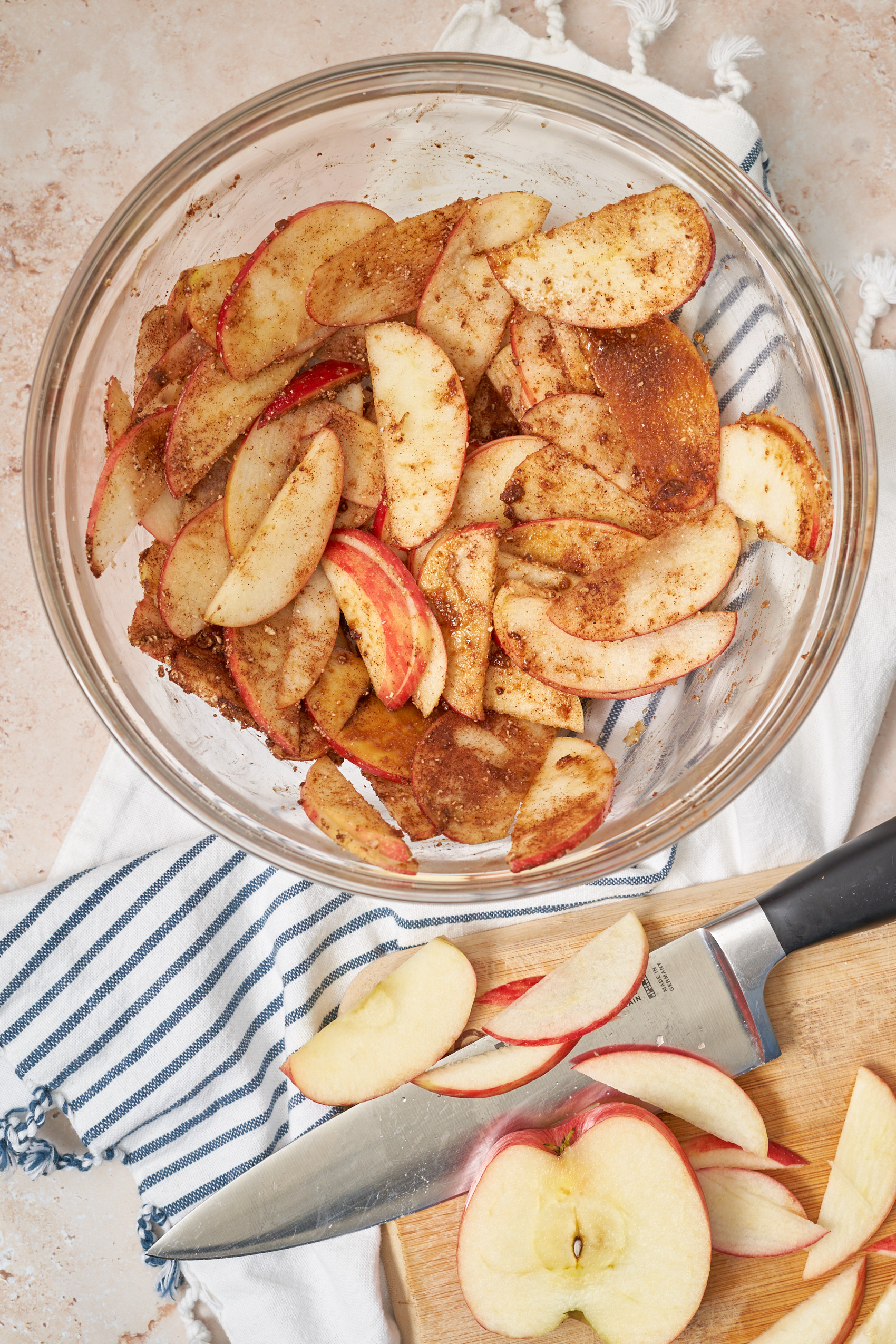 How to Make the Apple Pie Filling

For the filling for your apple pie bars, you can use the same bowl you just made your crust in! Slice up your apples and add them to the bowl with your coconut sugar, oat flour, applesauce, vanilla, cinnamon, nutmeg and salt. Stir to coat the apples and let them sit to macerate for a few minutes.

Once you’ve given your crust its first bake and have let it cool, you’ll spread the apple pie filling on top of your crust. Put the pan of apple pie bars back in the oven for 40-45 minutes, or until your topping is brown and starting to get toasty.

Now time to make the toppings! 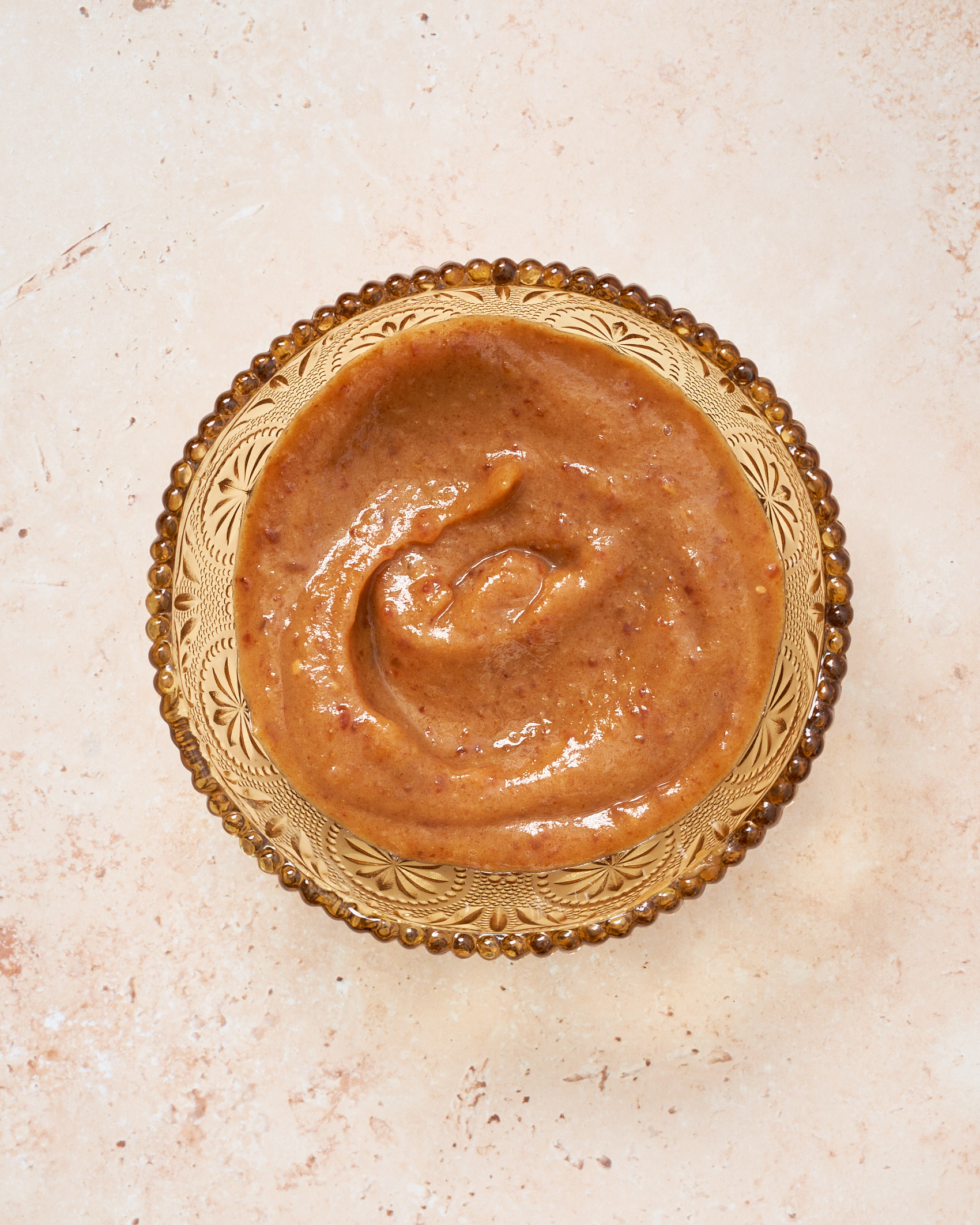 How to Make Date Caramel Sauce

There are a lot of reasons why these salted caramel apple pie bars are so delicious, but that SAUCE. I think that’s the best part. I mean who doesn’t love salted caramel? And BONUS – this salted caramel is actually a date caramel sauce! So it’s a little healthier (and easier to make!) than a traditional salted caramel.

To make it, you’ll want to start by soaking your dates in hot water until they start to soften. Then, add your soaked dates, non-dairy milk and salt to a blender and blend it all up until everything is suuuuuper smooth. It’s that simple! No burning sugar in your sauce pan and cleaning up a crystalized mess. Just a delicious, salty, sweet date caramel sauce in a matter of minutes. 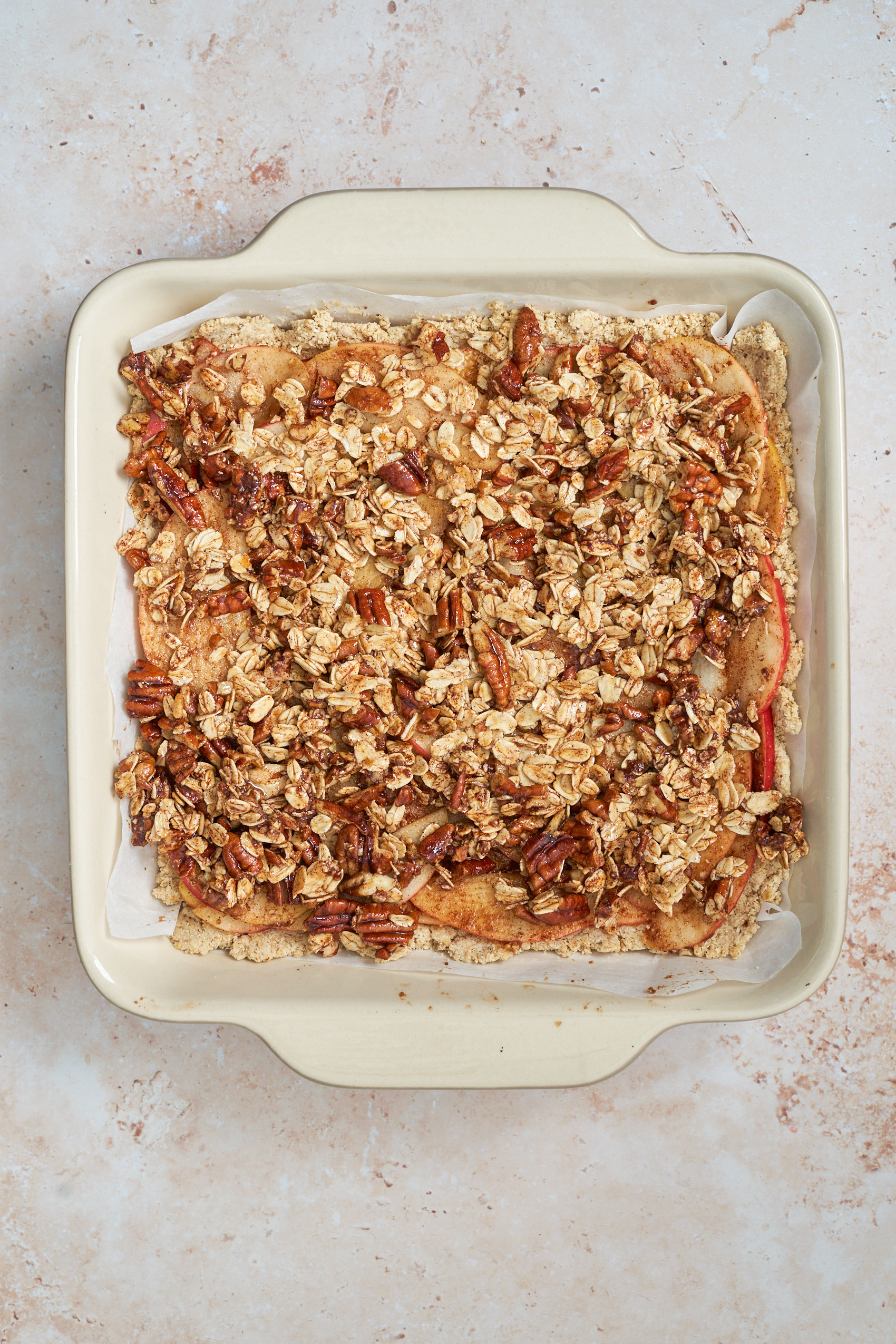 How to Make Gluten-Free Crumble Topping

I don’t know that I could ever decide between apple crumble and apple pie, so why not meet in the middle? Sure, these are apple pie bars, but we’re finishing them off with a gluten-free apple crumble topping because why the heck not. It’s crunchy, salty, sweet and so delicious.

To make the apple crumble topping, mix together old-fashioned rolled oats, oat flour, pecans, cinnamon and salt. Then, add in a bit of melted coconut oil, maple syrup and vanilla. Fold everything together until the crumble is well-coated in the coconut oil and maple syrup. 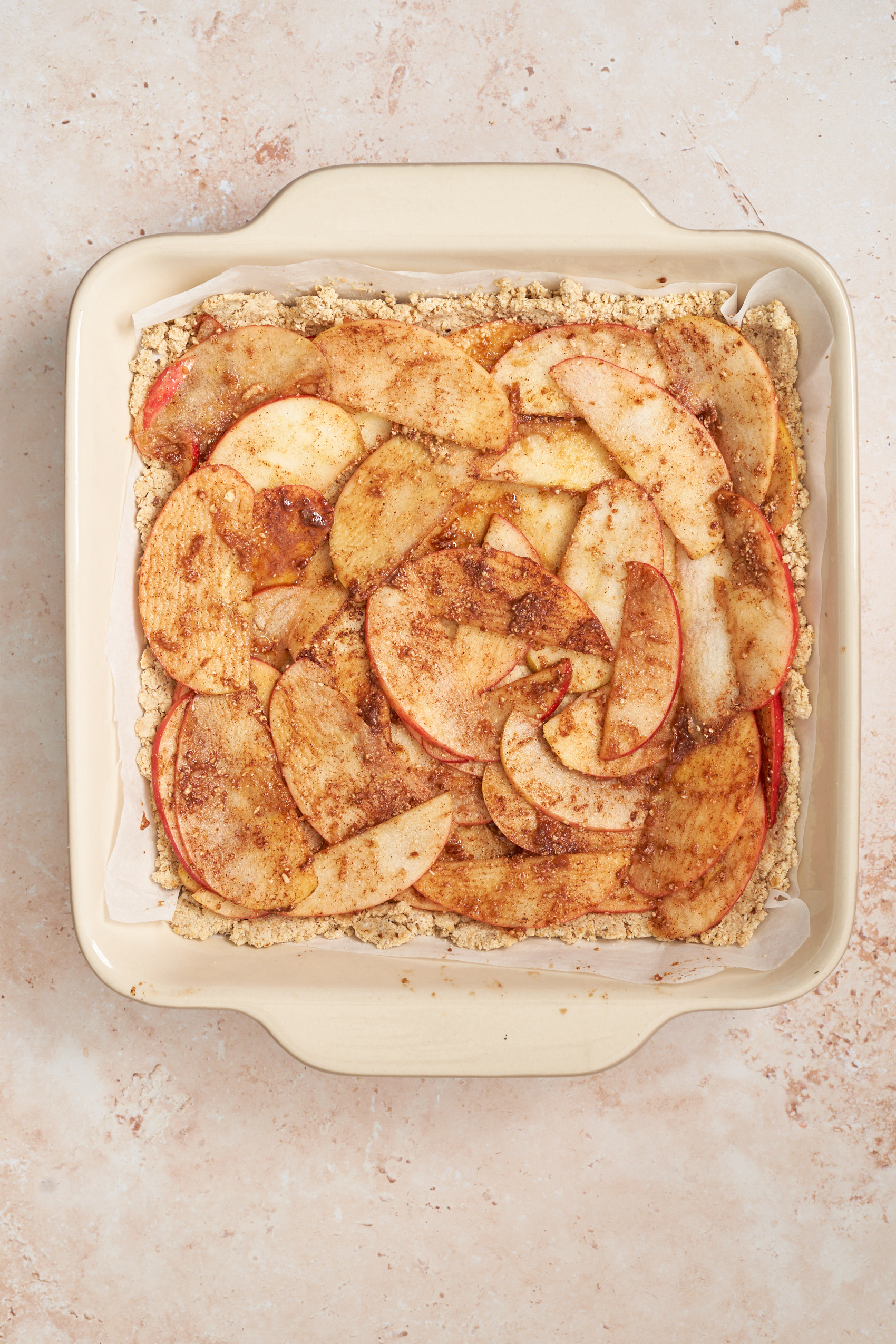 This isn’t technically a “dump into one bowl, mix, and bake” sort of recipe, but it’s super easy once you break it down. There’s really only three steps when you’re making these vegan apple pie bars:

Now this is the HARDEST PART, but it’s critical. You have to let the bars cool in the pan for at least an hour before cutting into them. If you slice into them straight out of the oven, they’ll be a gooey mess.

Once they’re (finally) cool, pull them out of the fridge and drizzle your homemade date caramel sauce on top! NOW you can dig in 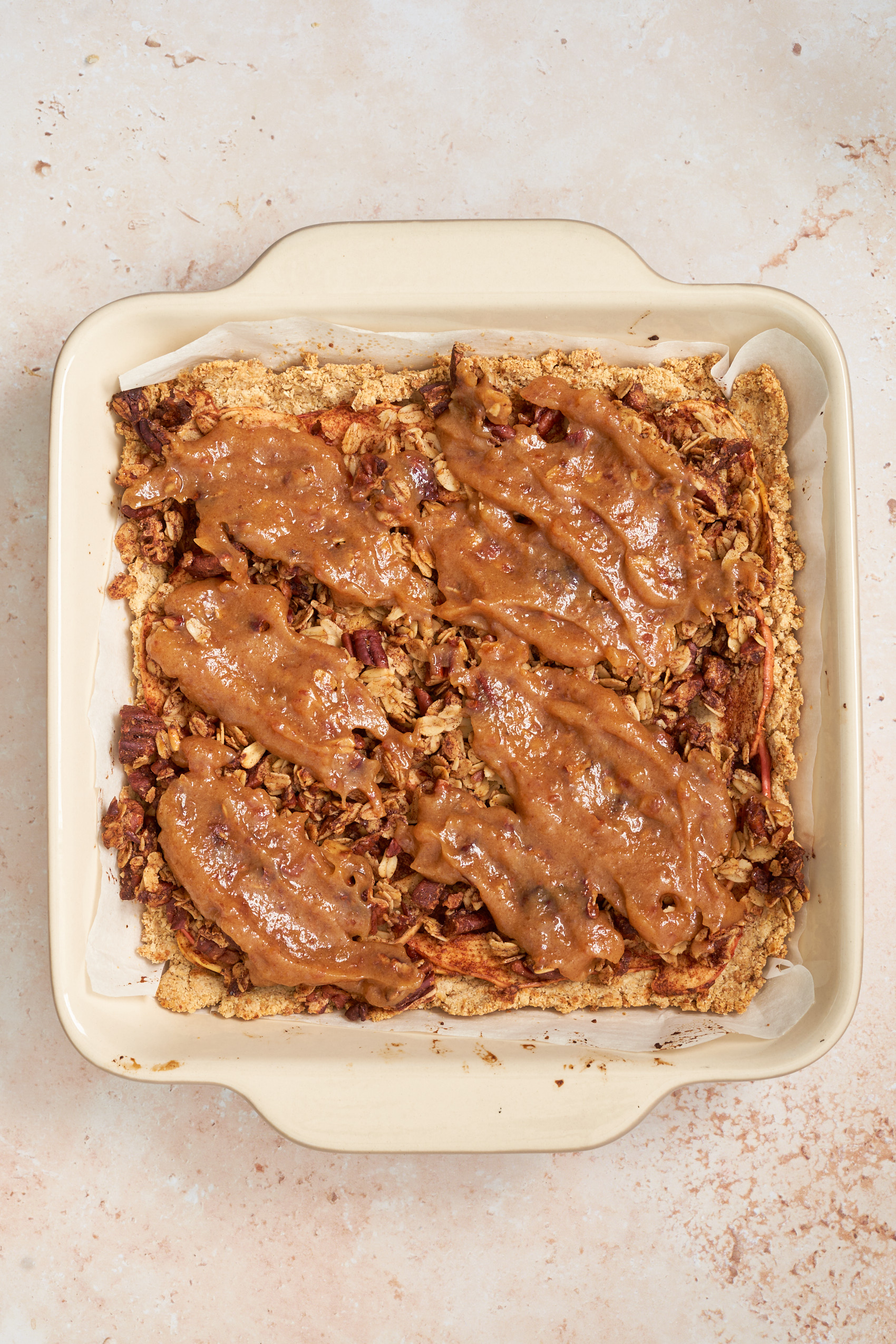 Pumpkin season and apple season BOTH deserve their time to shine, so celebrate apple season with more delicious apple-y treats! If you’re looking for more fall goodness, check out these other vegan apple recipes.

Make a batch of apple pie bars for the perfect shareable fall dessert! Plus, these Salted Caramel Apple Pie Bars are vegan and gluten-free! 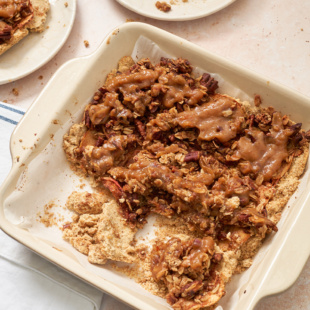 *I sliced the apples vertically about 1/8″ – 1/4″ thick and cut those slices in half. Cut out the core and seeds.
**You can use any nut you want, like walnuts or almonds. You can also use seeds if you’re nut-free.

MEAL PREP WITH ME ~ delicious vegan recipes for the week 🌱 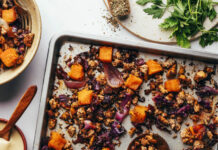 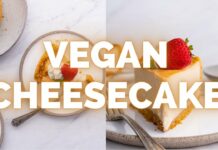