An easy peasy keto tortilla recipe! Takes about 5 minutes to whip up and only SECONDS to cook on the stove. Gluten, grain and sugar free.

These tortilla’s are perfect for soft shell tacos, burritos, wraps and even enchiladas! They are very versatile and are under 2 net carbs per tortilla.

One of the greatest things about using psyllium husk is that it is nearly entirely fibre. So while the total carbs are around 5.3g, fibre accounts for 3g of those! It’s perfect!

So now I know a number of people will probably ask about the whey isolate. I used it to remove some of the almond flour taste as I’m not a big fan of the flavour by itself. If you want to remove the whey, I THINK you can use 1/4 cup (20g) of psyllium husk instead.. Know that I have not tried that, but I believe it should work.

When you are making this recipe, you’ll notice that the dough might form a wet, sticky ball – that is good! That is what you want. That just means that the psyllium husk hasn’t absorbed the water yet. So that is why it is necessary to let the dough sit for a few minutes. You will then notice that the water has been absorbed and it is less sticky.

If you like this recipe, make sure to check out my keto dinner rolls, keto white bread, and keto Hawaiian bread rolls!

What you will need:

In a mixing bowl, whisk together the almond flour, whey isolate, psyllium husk and xanthan gum.

Pour in the olive oil, egg and water.

Stir until it forms a crumbly dough, then start to knead with your hands until all the dough is incorporated.

It will become sticky, so let the dough sit for 2-3 minutes while you bring a non-stick pan up to temperature over medium-high heat.

Split the dough into 5 balls and cover with a damp towel or paper towel.

Take one of the balls of dough and place between two sheets or parchment paper.

Use a rolling pin to flatten the dough ball flat.

Use a bowl (or in my case, a blender lid) to cut out a circle shape.
Slowly peel the flattened dough off the parchment paper & set aside any extra dough from cutting out the circles to reuse.

Immediately put the circle of dough into the pan.

The tortilla should have turned a white colour.

Take the tortilla off the heat and cover with a damp towel or paper towel.

Continue on with the rest of the tortillas.

Be aware – if you cook the tortilla too long, it will start to crisp up and won’t be flexible.

What can you find on The Hungry Elephant’s youtube? Keto recipes, low carb recipes and more RECIPES.. We LOVE to cook and we want to share them with YOU. From tasty treats to mouth-drooling appetizers to delicious one-course meals. All videos after February 28th 2017 are keto and low carb!.. Tuesday and Friday.

So, follow along with us as we bring you the latest from our kitchen!

For full recipes, just head to: 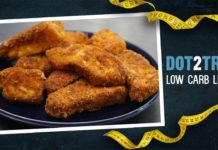 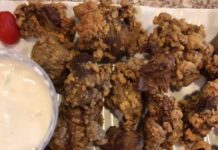 My Recipes -
56
50
Categories
The latest recipes