We’ll take you on a trip down memory lane with this fan-favorite light green jello salad from the famed Furr’s Fresh Buffet or Furr’s Cafeteria! This recipe is a different take on the plain jello recipe and is made up of pineapple and cheese mixture mixed together with lime gelatin! This fun dessert needs at least 4 hours of chilling or better if overnight!

⬇️ How to make Furr’s Light Green Jello Salad ⬇️
0:09 Using your cold mixing bowl, add your heavy cream and whip until stiff peaks form. Set aside in a chilled area.
0:24 In a large mixing bowl, add cream cheese and beat for roughly 5 minutes until soft and pliable.
0:34 Add the drained pineapples and beat until incorporated. Set aside.
0:48 In another large mixing bowl, empty gelatin and add the boiling water. Stir until the gelatin has dissolved.
0:58 Pour the cold water into the mixture and stir.
1:02 Add the gelatin mixture into the pineapple-cheese mixture and fold until evenly incorporated.
1:13 Lastly, fold your whipped cream into your gelatin and cheese mixture until evenly incorporated.
1:23 Pour the mixture into a 9-inch greased springform cake tin of your choice and place the cake tin on top of a baking sheet.
1:25 Sprinkle the pecans on top and chill the mixture for at least 4 hours to overnight, or until the mixture has set.
1:39 When ready to unmold, heat the sides of your cake tin with a kitchen torch until just warm but not hot. You should also see the gelatin “detach” itself from the springform lid. You may also need an offset spatula to pry the gelatin from the mould.
1:47 Gently remove the springform lid, and portion accordingly. Enjoy your delicious jello salad! 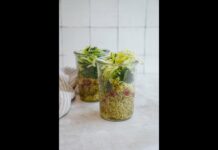 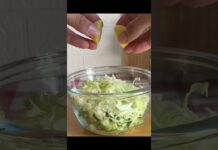 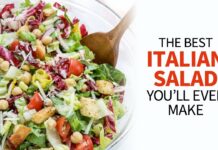