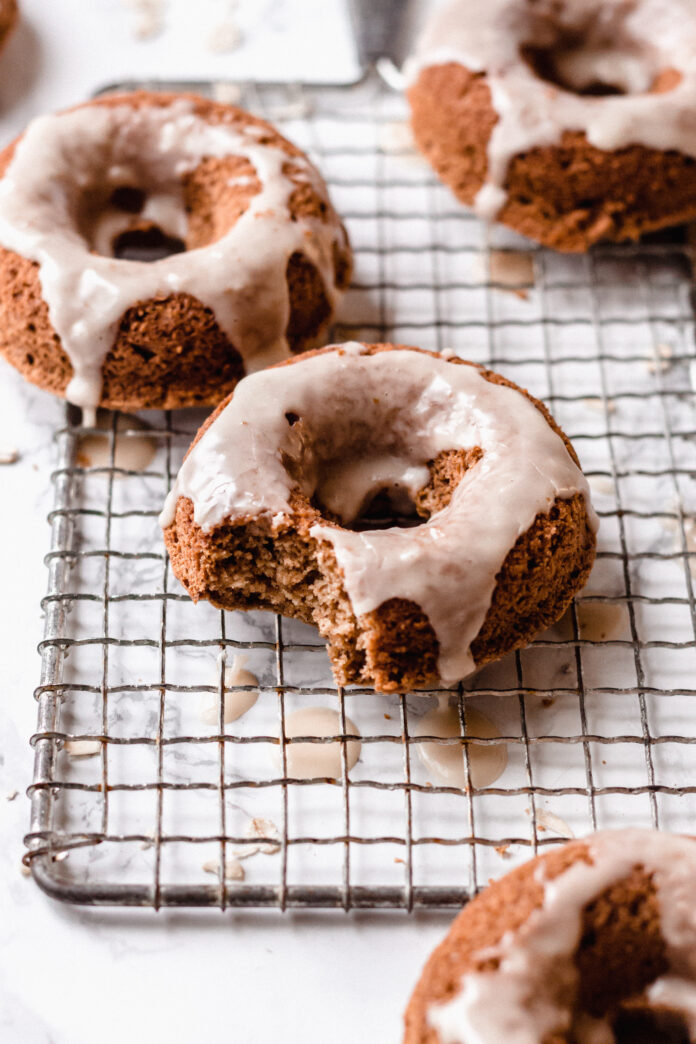 These baked cinnamon donuts are a craveable morning treat. This gluten free baked donut recipe features oat flour and is topped with a sweet maple donut glaze. In partnership with One Degree Organics! 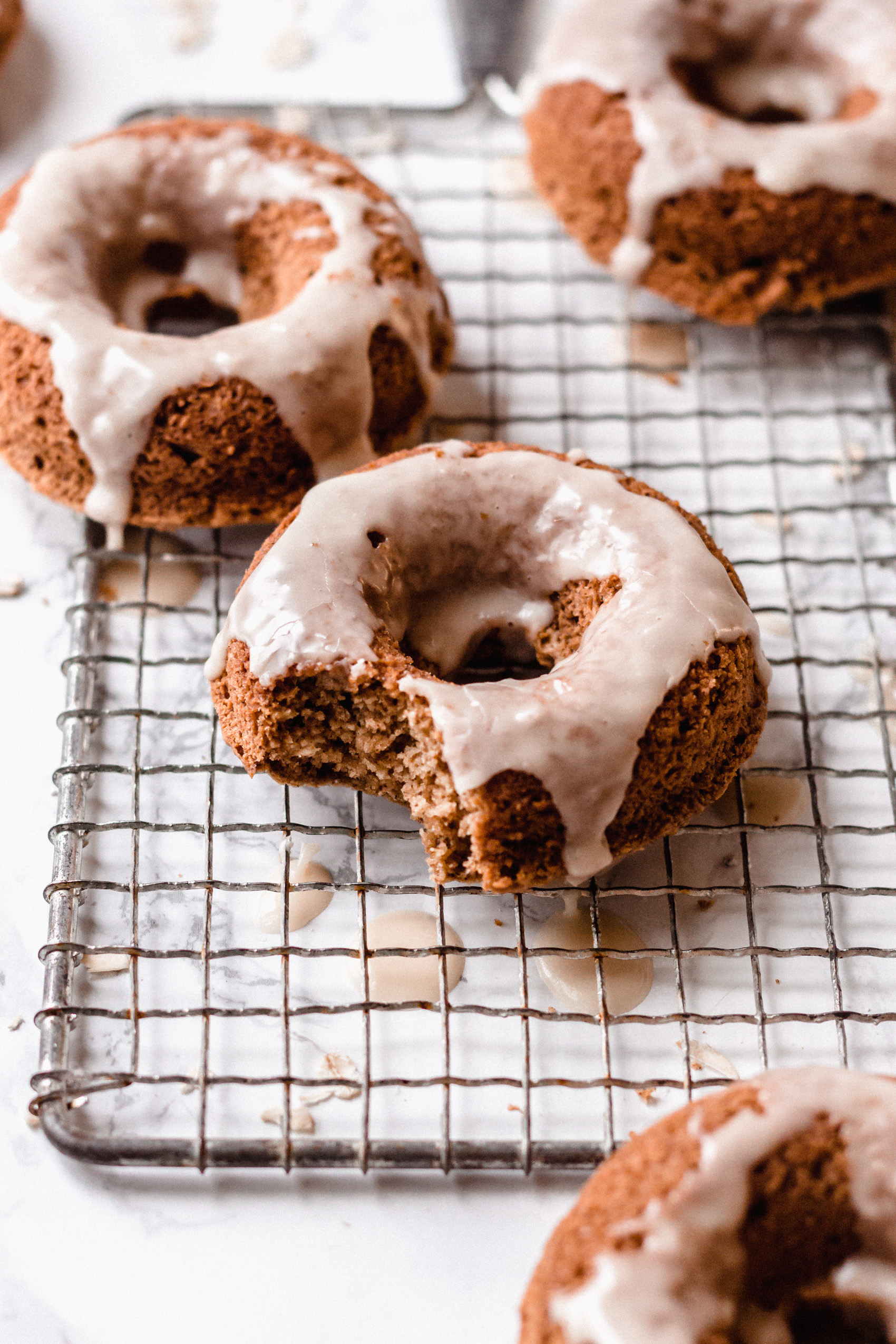 Ever since I got a donut pan years ago to make these gingerbread donuts, I’ve been dreaming up flavor combinations for more baked donuts. To me, one of the best flavors in a donut is maple. And what goes amazing with maple? Cinnamon! Thus, these baked cinnamon donuts with maple glaze were born. Imagine how incredible these will be in the fall with a hot cup of coffee!

Here’s why I know you’ll love this baked donut recipe: 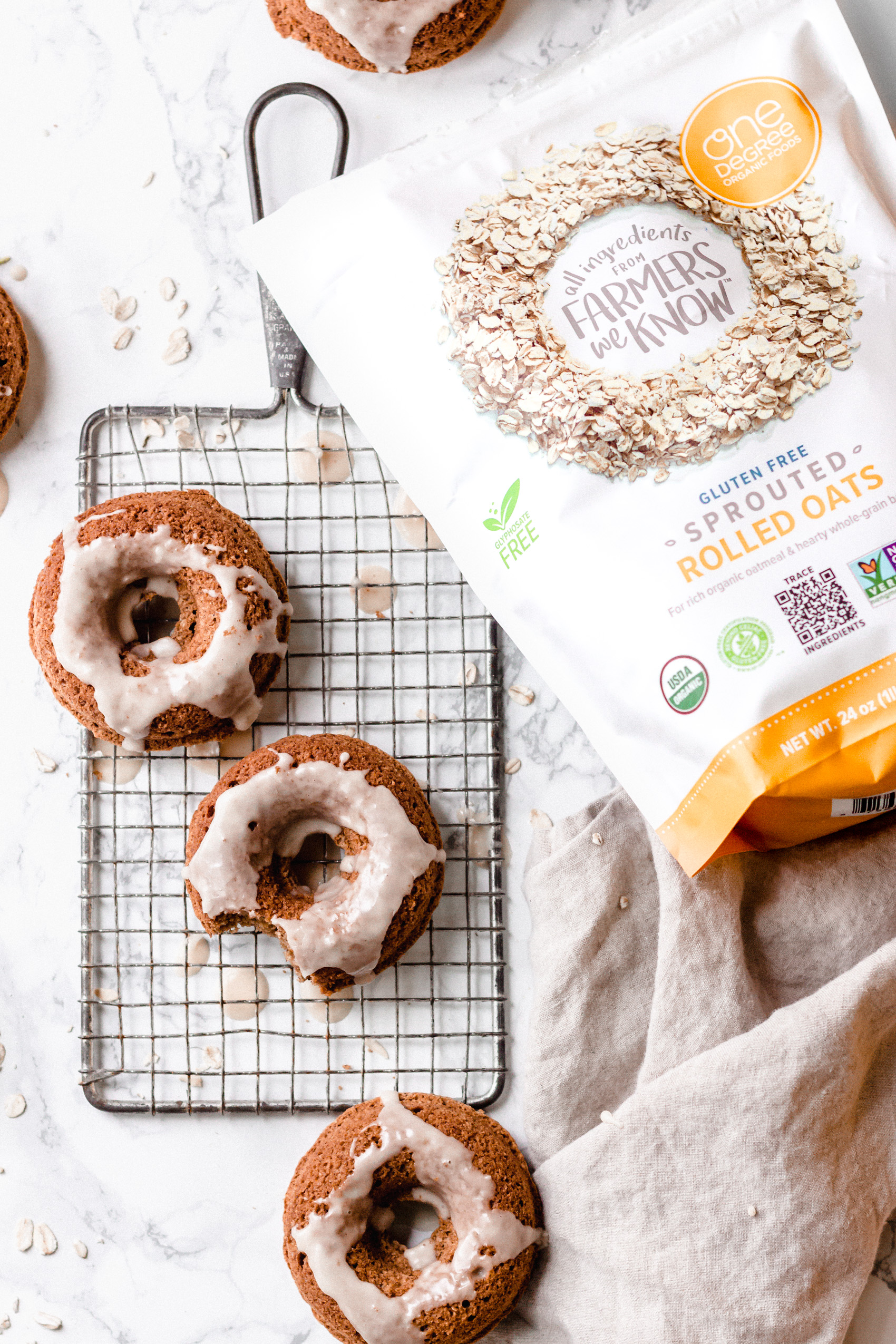 Here’s everything you’ll need to make these vegan cinnamon donuts:

What I love most about One Degree Oats is that they genuinely care about and respect the farmers with whom they partner. You can see that clearly in the time they spend visiting farms and connecting with the families who run these farms, plus the fair prices they pay for crops. I love that on every bag of One Degree Organics Sprouted Rolled Oats (and the rest of their products, including flours for baking), you can scan the QR code on the back to see who grew the exact oats you’re eating. So cool! 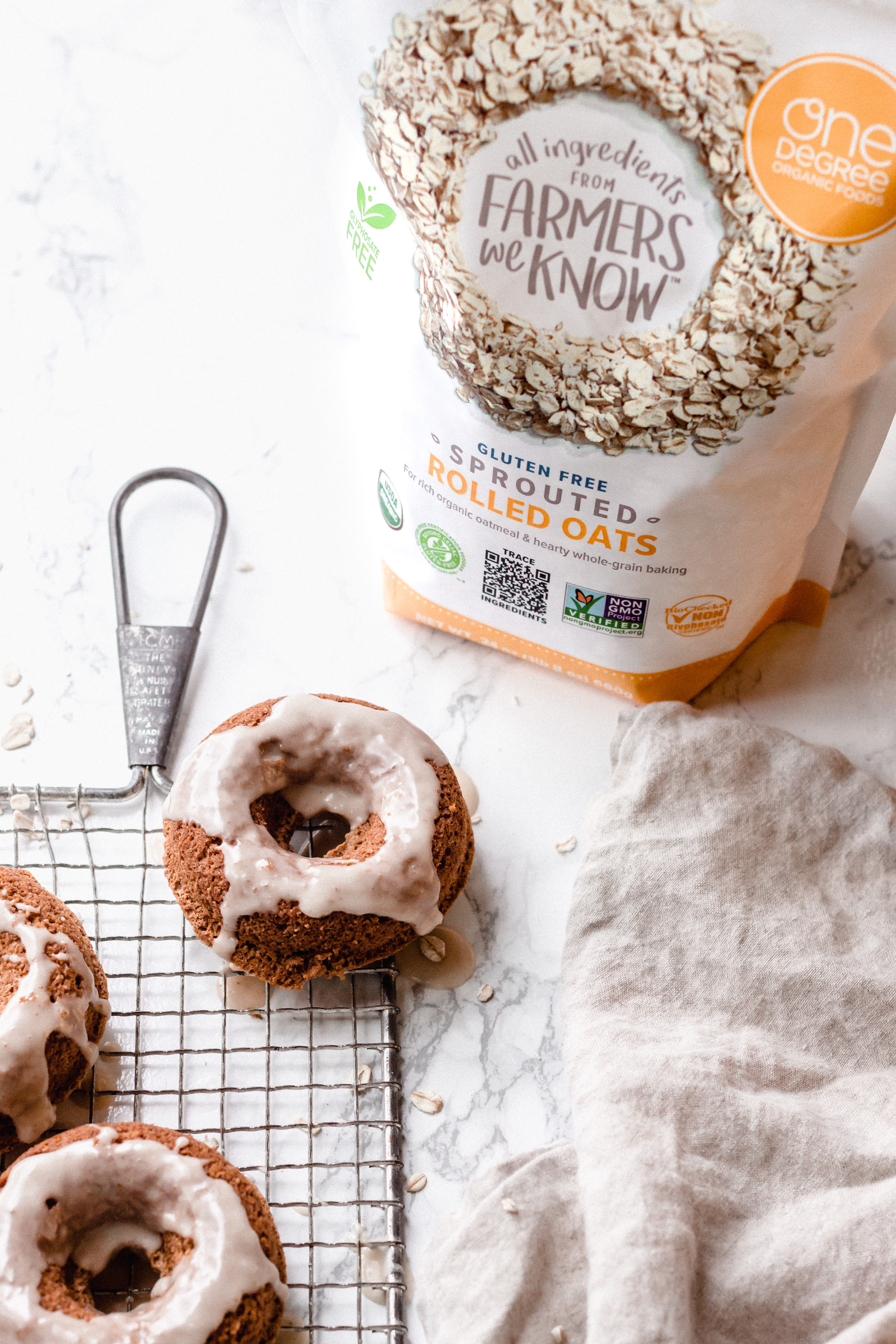 How to Make these Gluten Free Donuts

Making these baked cinnamon donuts couldn’t be easier! Also, what I love about this recipe is that it can also be made in a muffin tin, if you prefer that or don’t have a donut pan.

Here are the basic steps for baking this vegan donut recipe: 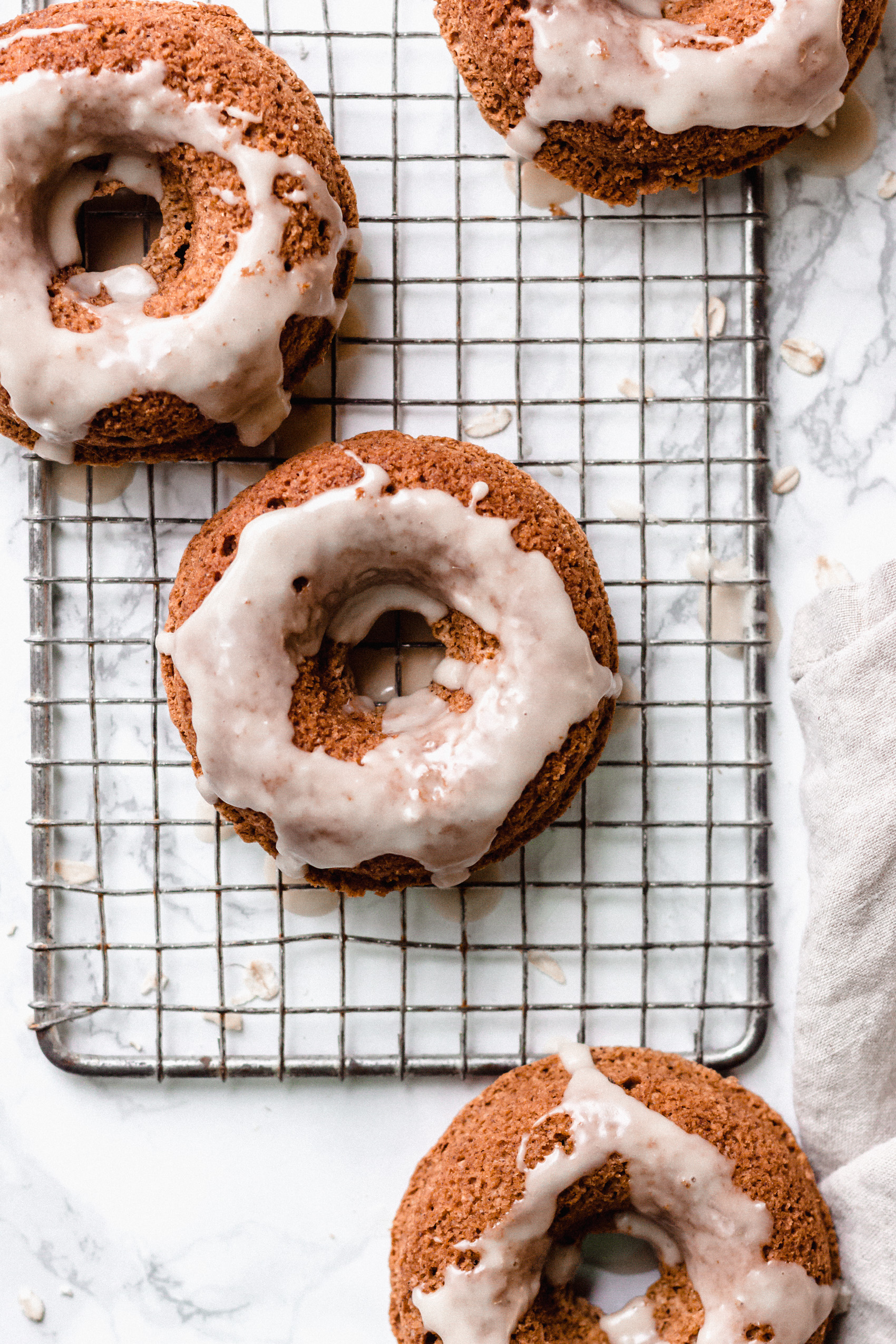 How to Make Maple Glaze for Donuts

Luckily, making the maple glaze for these baked cinnamon donuts is super easy!

The main base of the glaze is powdered sugar and non-dairy milk. However, you only need a LITTLE BIT of milk, so be careful measuring so you don’t have to start over. A tablespoon of maple syrup adds a touch of maple flavor. If you want to pack even more maple flavor, you can use a drop or so of maple extract.

All you have to do is stir all these ingredients together, then glaze the baked donuts. However, make sure the donuts have cooled so the glaze doesn’t just run off. 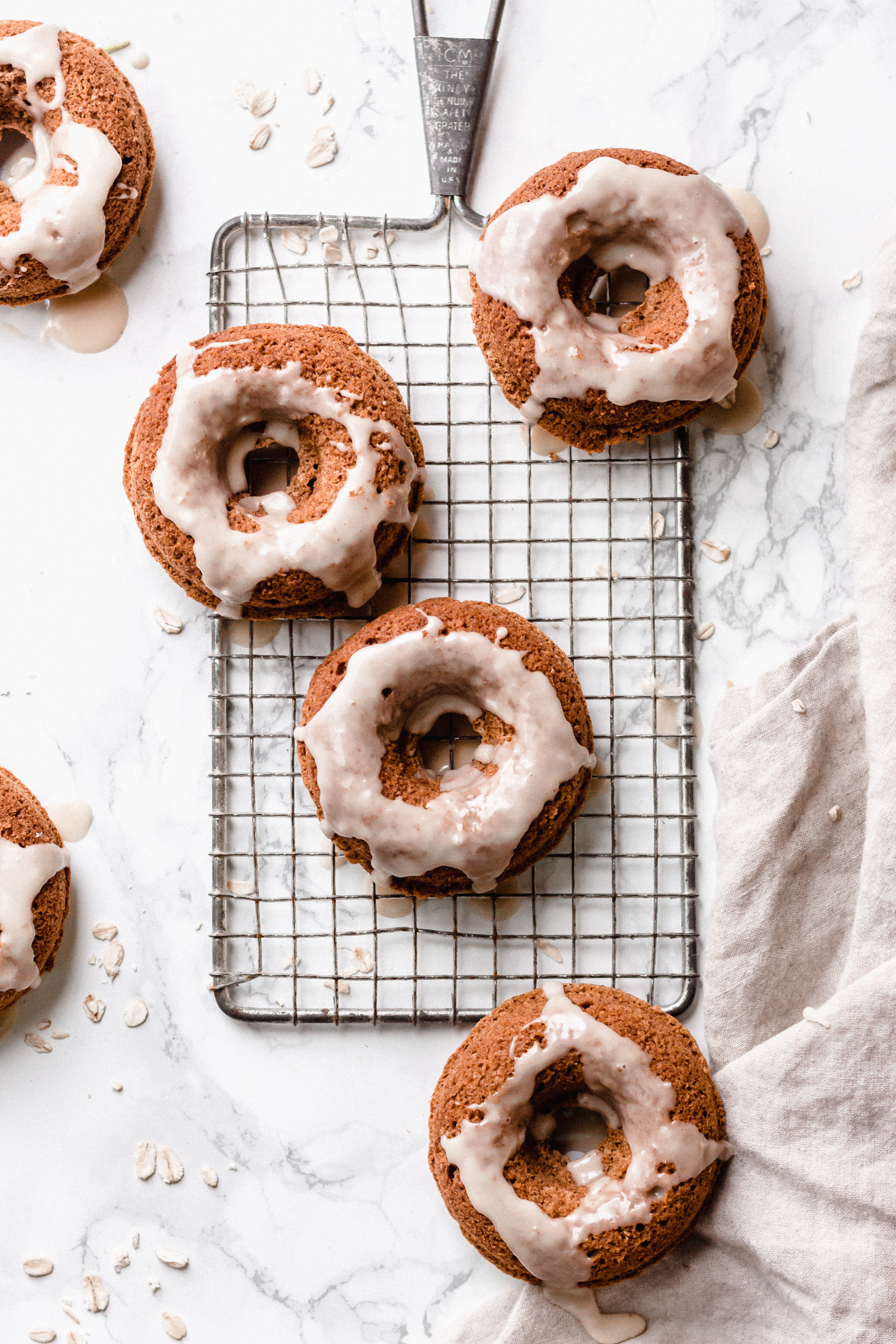 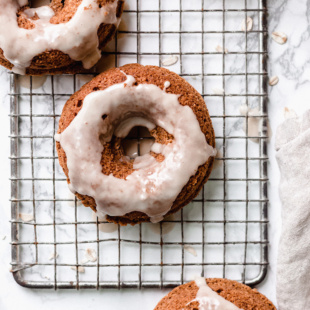 *Use a nut-free alternative like sunflower seed butter, if needed.

**If you don’t have a food processor or blender up to the job, One Degree Organics also has flours available for purchase! I’m doing it this way because I love the flavor imparted by the oats.

Thanks to One Degree Organics for sponsoring this post! I love working with brands whose products I really love and would honestly recommend. Thank you for your support! 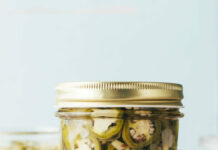 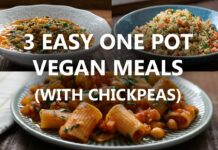 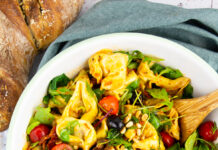 My Recipes -
362
50
Categories
The latest recipes